This was a medium Mobile challenge that not many people solved. In the end, I was one of only 20 people to solve it. I had learned some things about Mobile reversing a few months back, so it was really fun to be able to use this knowledge in the challenge. It took me a while to understand how the code worked but eventually, I got it.

Since this was a Mobile challenge, we got a APK file called travelportal.apk, which is the app we need to reverse engineer. I like to use Android Studio to run the app on an emulated phone, so I can get a quick glance at how the app looks. If you're new to Android Studio or APKs in general I am planning to make a full introduction to APK reversing in the future.

For now, just know that you can import APKs by going to File -> Profile or Debug APK. When it's open, you may need to create an Android device first. Do this in the AVD Manager that you can find under Tools. When you have created a device you can run the app using the green play button. This should then open an emulated phone with the APK installed and opened: 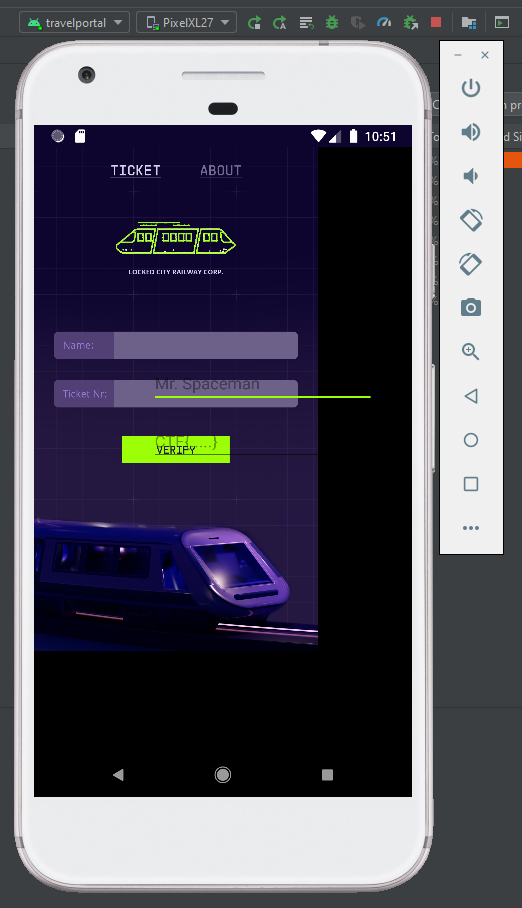 As you can see in the picture above, the inputs are a bit messed up, probably because the app was made for a different phone size.

The app is still usable though. We can click on the first input for a name and the second input for a "Ticket Nr.". The placeholder for this value is "CTF{...}" so this is probably the flag we need to find. A classic "find the correct input" challenge for reversing. When we input anything wrong here it just says "TICKET INVALID".

Now that we have an idea of the app, we can start reverse engineering the code. As you may know, APK files are just ZIP archives, and we can quite literally just unzip them to get their contents.

The interesting files here are the 4 classes.dex files. These files contain the classes full of code that the app uses. To get this code out we can use a tool called dex2jar, which converts these .dex files into Java .jar files. You can run the script on the .dex files individually, but it can also automatically find them in a .apk file and combine them into a single JAR.

This .jar file now contains the compiled Java code of the app. JAR files are also just ZIP files that can be extracted using unzip.

Now we have a folder travelportal-dex2jar that contains lots of .class files. These are known as Java bytecode, which is not yet very readable for us humans. We can use a Java decompiler to turn these .class files into .java files and then we'll finally have readable Java code. The simplest way I found was to just use IntelliJ IDEA which uses the Fernflower Java decompiler underneath. If you don't want to or can't install IntelliJ another option is to just use the Fernflower program alone which can be found online and then decompiling the files yourself. Then you can just use any other IDE to view the created .java files.

In this case, though I'll open the unzipped directory in IntelliJ. When open you can browse the code yourself in the left panel, then simply double-click on any file to open and decompile it. To find the main class for an Android app you should look for the MainActivity file. In IntelliJ, we can simply press Ctrl+Shift+N to search in filenames, then just type "MainActivity" and you should find one file that matches. Opening it shows all the Java code that is the main part of the app. Here is where we can start to really look at the code.

In the MainActivity.class file we see the following interesting code:

That seems interesting already. It takes our inputted name and ticket number into a Paupercrypt.encrypt() function. The encrypted value is then compared to a big hex string that is hardcoded into the app. Let's now finally see what this encrypt() function does, which comes from the crypto.Paupercrypt package one directory back. In the Paupercrypt.class file we find our function:

Finally, we see the real encryption logic. Taking a quick glance it does some weird things with the hash() function, and uses 8 AES encryption rounds on something. Remember that var0 here is our name input, and var1 is our ticket number or the flag. Let's follow this code line by line for a bit to understand what it exactly does.

Then right after it overwrites var0 (the name hash) with var1 (the ticket). Next, I think the decompiler wasn't sure about the order, but it seems to set var1 = var2 which means to overwrite the original ticket variable with the new hash of 3 bytes. Then a for loop using var3 as the iterator which starts at 0, counts up by one each iteration and ends when it is at 8. So the loop just runs for 8 iterations in total.

In this loop, some encryption and hashing is involved. The first thing it does is AES ECB encrypt the var0, which is the ticket now, with var1 being the key. This key was the hash of 3 random bytes we found earlier. The result of this encryption is stored in var0 itself, so it overwrites the value. Then after, it hashes var1 with md5 again and overwrites it. This makes the key change every iteration. Remember that these two steps are repeated 8 times in the for loop meaning the var0 variable is encrypted 8 times with different hashes of var1.

All of this might be a bit hard to get your head around at first, but it is the essence of this challenge and how it can be solved. Remember that this var0 variable gets returned, and compared against the big hardcoded hex value in TicketVerification.checkTicket(). So we need to somehow reverse this logic to go from the encrypted value back to the original ticket.

So what this code essentially does is use AES to encrypt the flag 8 times. At the start, the key is an MD5 hash of 3 random bytes. Then each iteration the new key is the previous key MD5 hashed again. This means that we can get all the keys for the AES decryption only having to guess the initial 3 bytes of the key. Since 3 bytes are not that much we can just brute-force these values and every time try to decrypt the message with the keys until it fits the CTF{...} format.

I'm way more comfortable writing code in Python than in Java, so we'll first need to translate this Java encrypt() function into Python code. It isn't too bad, because Python has lots of cryptography libraries with handy functions like AES and MD5. I made use of the pycryptodome library to do the AES ECB encryption.

Just make sure you include the pad() function here because it doesn't do this automatically. If your initial input is not a multiple of 16 bytes the cipher.encrypt() function won't accept it. We can see in the Java AES_ECB_Encrypt() function that it uses "AES/ECB/PKCS5Padding" as the cipher, so in our case, we also use AES in ECB mode with PKCS 5 padding (the default).

This encrypt() function in Python is nice to have, but we want to decrypt with the brute-forcing technique from earlier, to decrypt the long hex string we saw. Let's think about what this function needs to do.

For encrypting the key at the start is a hash of 3 random bytes. We don't know these bytes, but we can brute-force them by trying every combination of bytes. Then we encrypt the flag 8 times, every time hashing the key again. This means that the last encryption uses the last hash of the key. The last encryption will be the first we decrypt, so we need to use the last key to decrypt the first time, and then the second-to-last key for the second decryption, etc. We'll do this by first making a list of all 8 keys we'll need, and then decrypt the ciphertext with the last key, each time removing the key when we use one. Then after the 8 decryptions, we know we have a possible plaintext, and we can check if it is the correct one by making sure it starts with "CTF{".

This challenge consisted of 2 parts. Above here was the solution to the first part, but the second part was significantly easier. When we look at the code in MainActivity there is another interesting function: 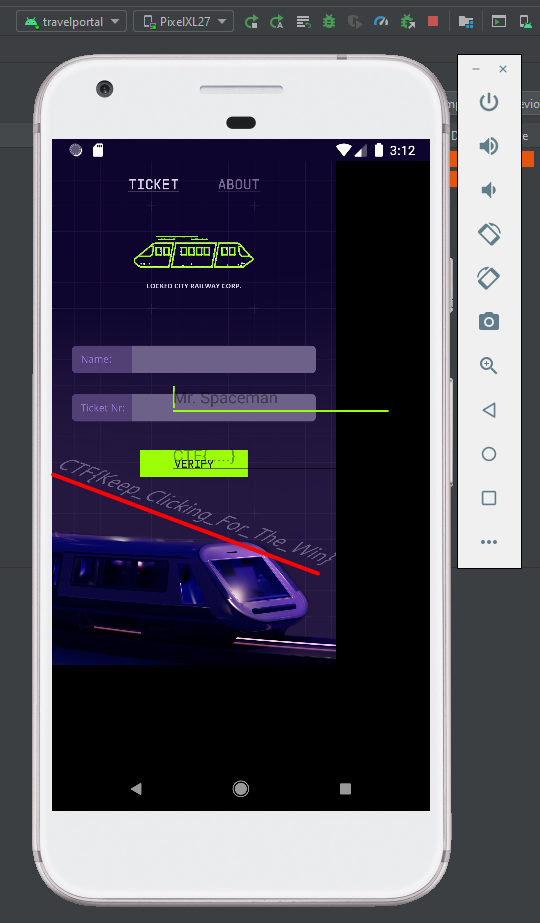 It shows the flag on the background image!
CTF{Keep_Clicking_For_The_Win}

The end! If you have any questions feel free to ask me anywhere on my Contacts